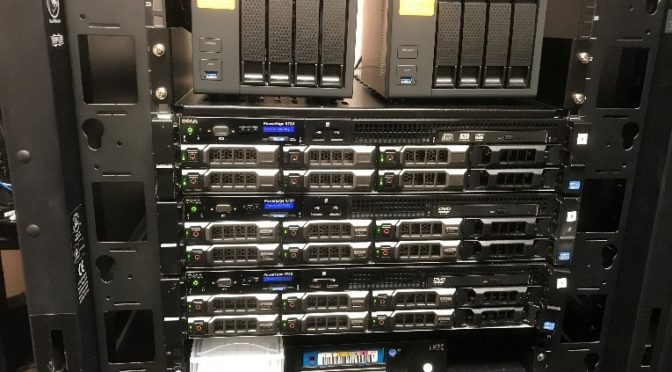 Like most retailers, Peavey had old physical POS servers located in each store across Central and Western Canada.  Servers more than 4 years old can be a drain on an enterprise costing you in energy, cooling and even loss of productivity.  The typical price tag for a new server is $2,500.00.  Multiply that server cost by 40 stores and Peavey had a capital hardware cost of $100,000.00 to replace all their POS store servers.  Furthermore, those 40 POS servers eat up a lot of energy over the course of a year and with Canada “enticing” everyone to go “green”, moving those 40 POS servers out of the stores and into the HQ data center in Red Deer, Alberta made a lot of sense.

RTC stepped in and designed a plan that would allow Peavey to remove the 40 POS servers from the stores and move them onto 3 servers utilizing two NAS components running all the virtual images and backups housed in their HQ data center.  The 3 servers with the two NAS components cost a total of $12,000.00 in capital hardware expense.  Further, the power consumption of 40 POS servers in each store was reduced by approximately 75% with the 3 new servers and NAS components running in the HQ data center.  Finally, consider the cost reduction to technically support 40 servers located across Central and West Canada over 5 to 7 year life cycle now moved to 3 servers located on a rack in the Peavey HQ data center.

“It’s amazing how the migration to the new server farm was able to take place with no noticeable difference to the stores”, says Carolin Miller, the VP of  IT for Peavey Industries.  “Literally they were able to come in and start working the next day, with no apparent changes to their operations.  Having the peace of mind of the built-in redundancy, and having the servers located in a properly conditioned and monitored environment will be undoubtedly be advantageous and appreciated by the IT team.  This is another example of a job well done by RTC”.

“RTC was able to reduce store server footprints without sacrificing mission critical applications performance that drives a superior retail experience for the guest”, says Rich Gault Director of Network Services for RTC.   “The server software controls and assigns physical hardware resources to each virtual server, so in essence, each virtual server thinks it is a physical server.  Each store server is “backed up” in case the HQ server goes down or a network connection is disrupted.  Each StoreMS POS register has its own copy of the POS server data on it to continue to operate as a POS terminal if and when the POS server is “off line” and also has connectivity to the payment card processor so payment cards can be processed as well. Software updates and rollouts are simpler, redundancy is built in, and the entire system requires less touches and far less time.  If there is a corruption issue, the virtual server allows updates, loads and even rebuilds to be handled in the data center verses shipping hardware around or requiring visits to every store”,  adds Gault.

“It doesn’t take a “tech genius” to comprehend the capital and operational cost reductions gained eliminating 40 “in-store” physical servers and replacing them with 3 data center servers housing 40 virtual store servers within them, the 75% power savings to operate them and the reduced man power to support them”, says Bruce Hicks President RTC.